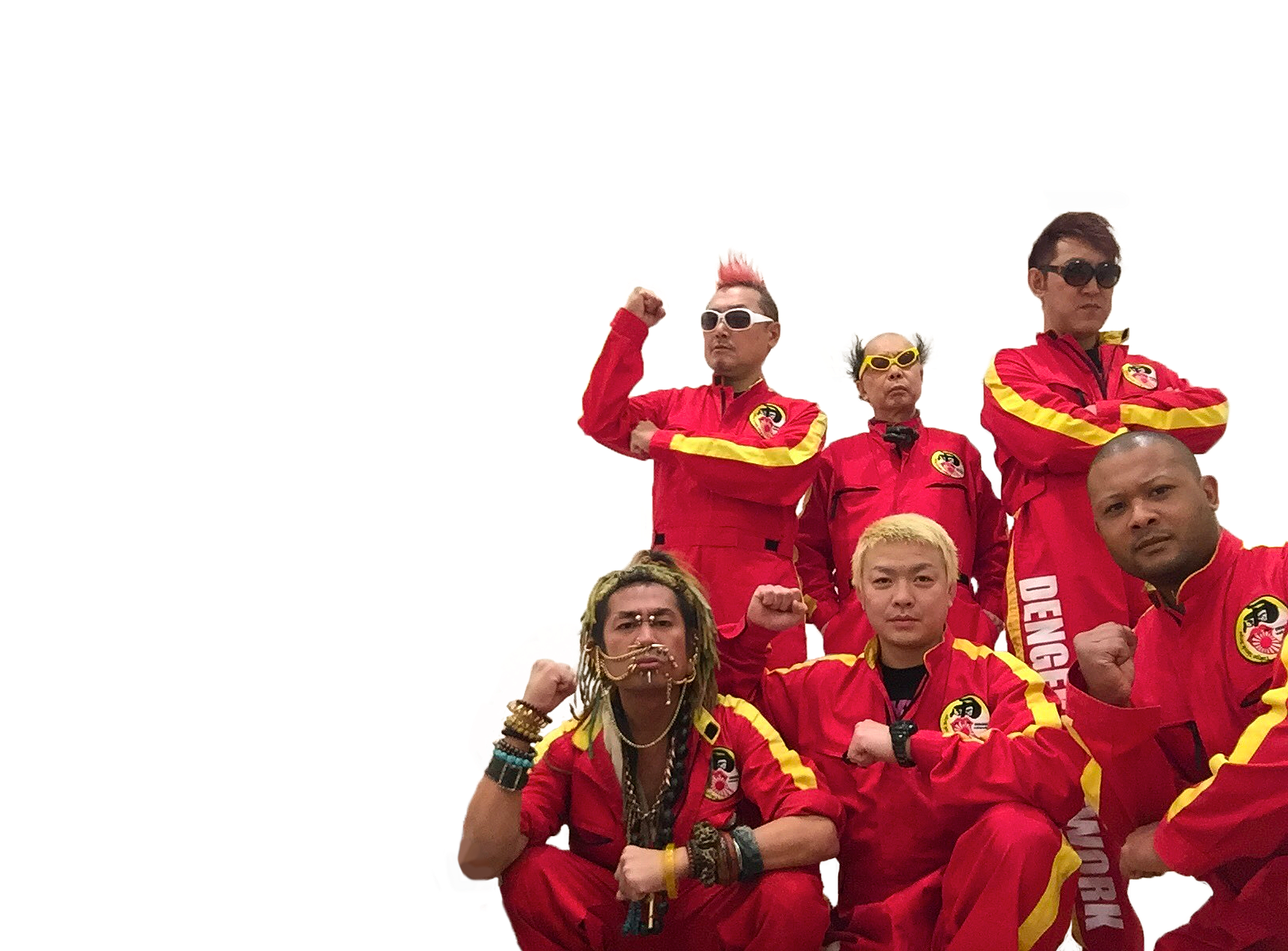 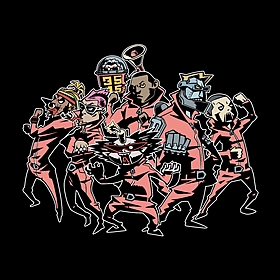 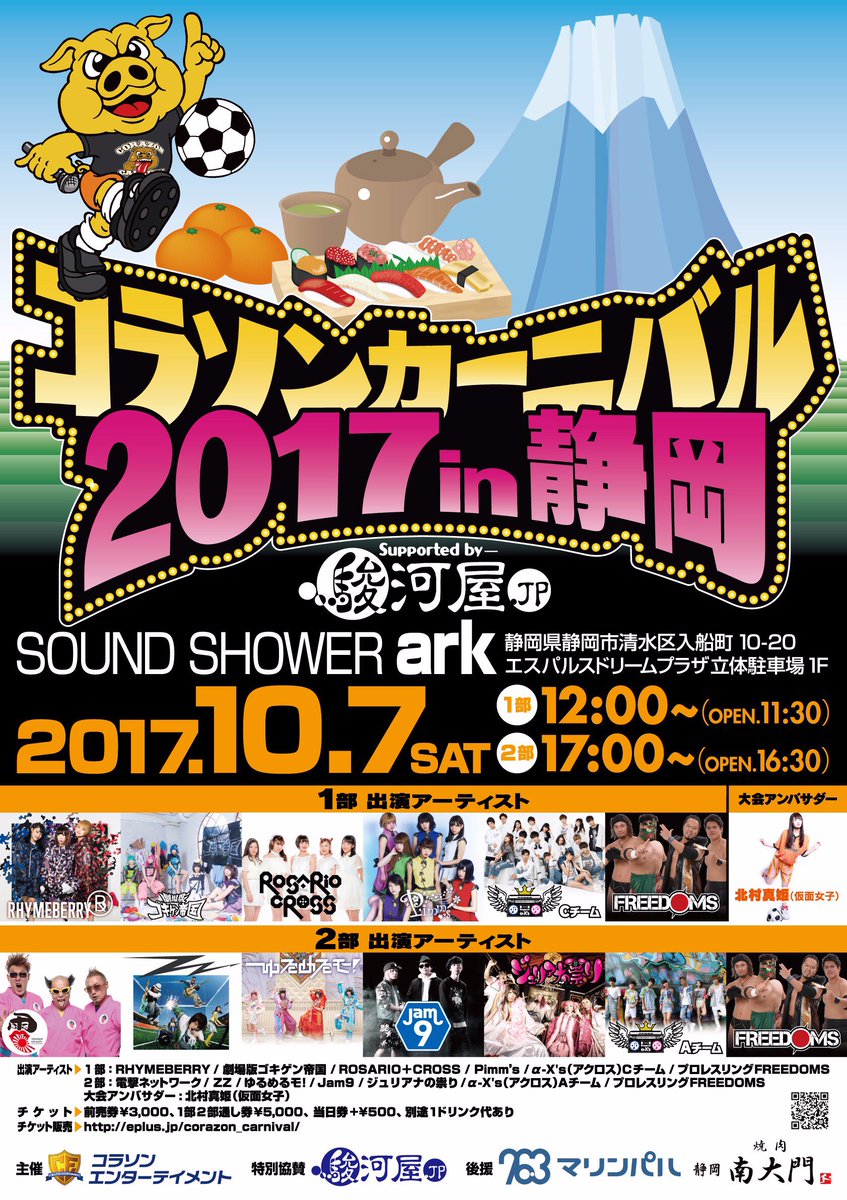 Scheduled to appear at Corazon Carnival in Shizuoka on Saturday, October 7th next week! The venue will be Shizuoka SOUND SHOWER ark at around 19:00 at night. https://t.co/PSggl7u42A
0
0
0 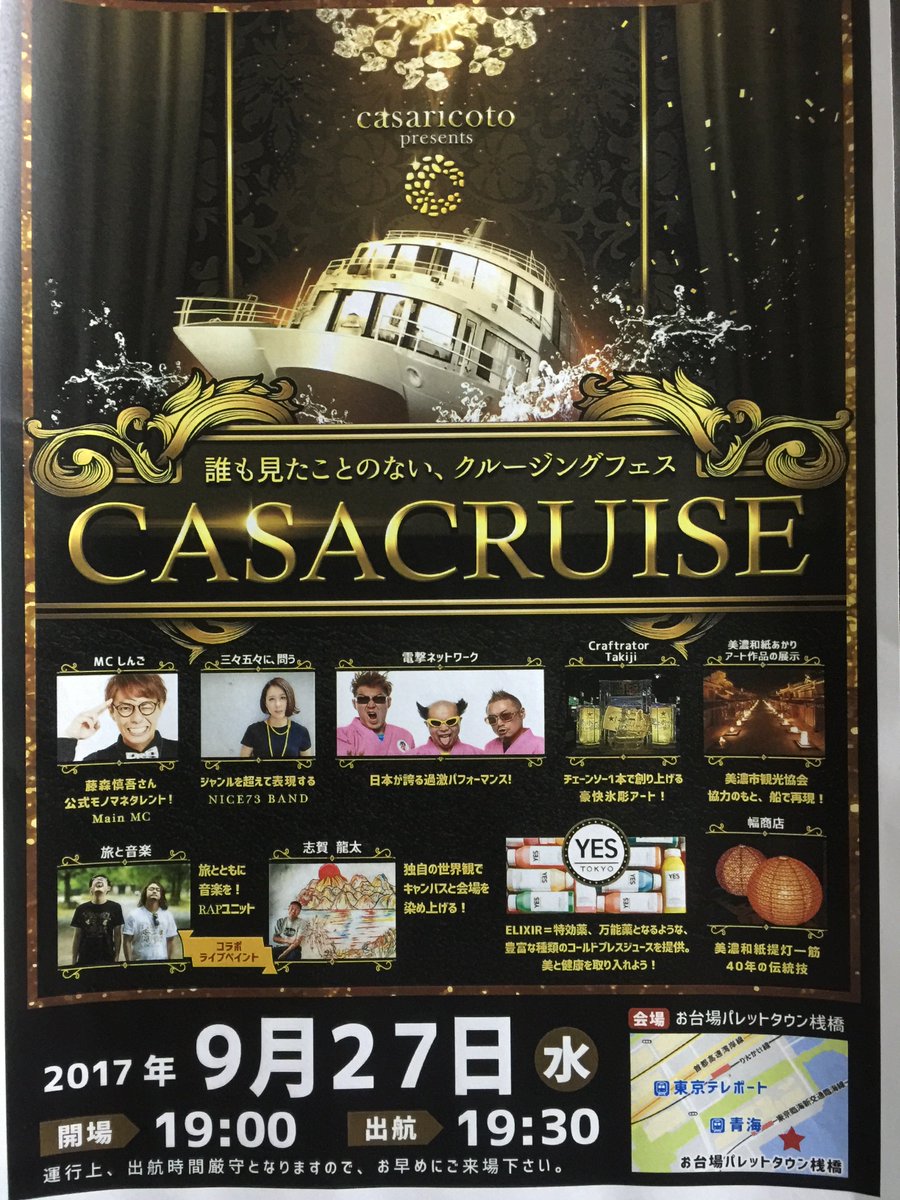 Cruising festival "CASACRUISE" that no one has seen will participate in the event of departure from Odaiba Palette Town at 19:30 on September 27 (Wednesday)! We are currently looking for tickets for the day and those who can participate. URL: https://t.co/Hepf8bTDZ3 https://t.co/pUgI5ttsaf
0
0
0
Scheduled to appear at the Haji Festival in Kuki City, Saitama Prefecture on Sunday, September 3rd! From 17:10, we are planning to perform at the most painful festival in Japan, with 1,500 people from all over the Kanto region, more than 200 otaku and more than 1,000 cosplayers nationwide.
0
0
0
24 hours on TV! (It may be reflected on the national broadcast ...) Guest appearances at the event in Niigata on 27th (Sun) Niigata venue, Bandai City Bus Center 2F from 12:40 Nagaoka venue, Aore Nagaoka from 16:00 TV Niigata Ending broadcast from 17:06
0
0
0 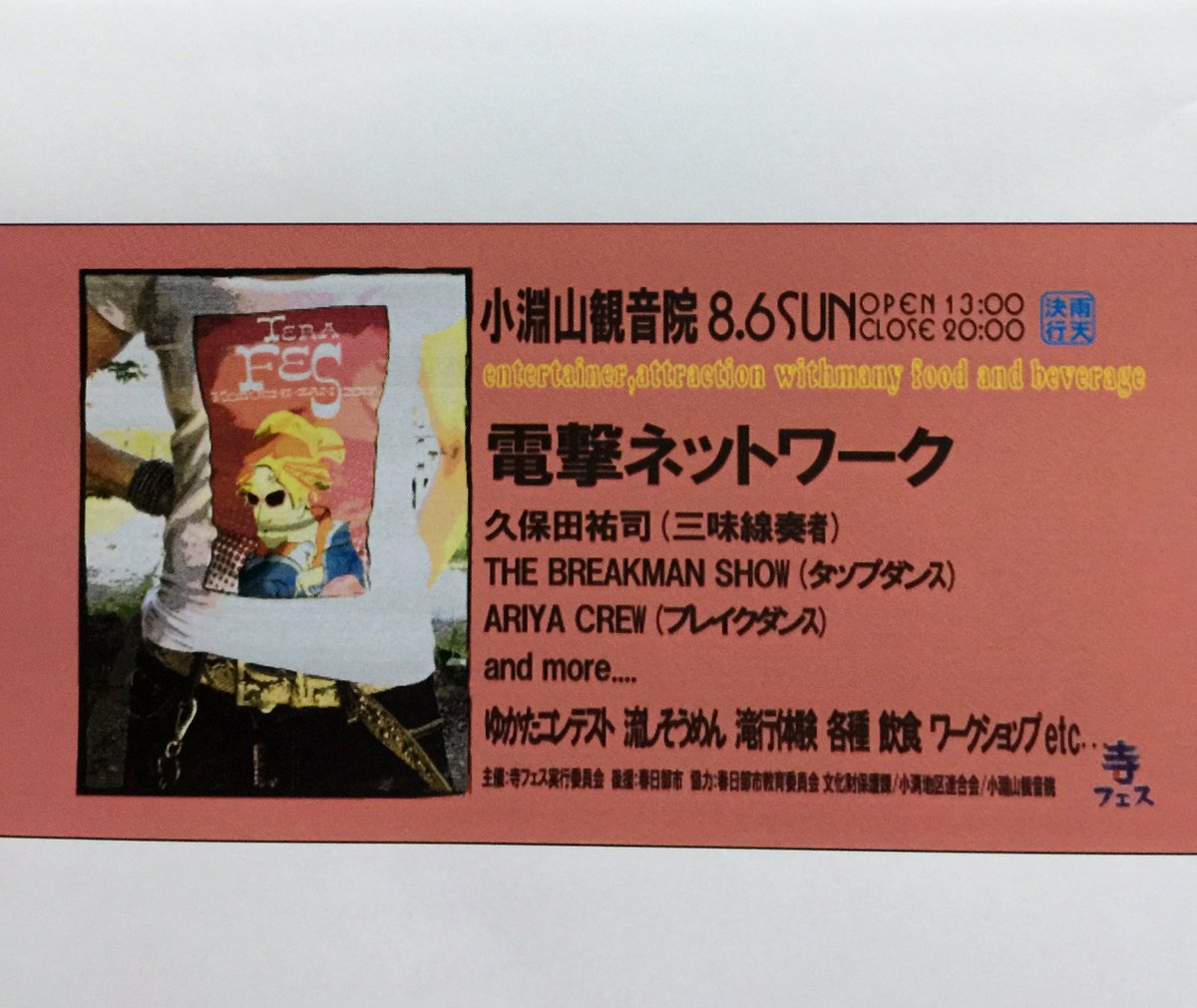 We are planning to perform at a fireworks display on August 5th and at a temple festival on August 6th! It is scheduled to appear at Matsudo Fireworks Festival in 2017 in Chiba Prefecture from 18:00 on Saturday, 5th. It is scheduled to appear at the temple festival Kobuchiyama 2017 in Kasukabe City, Saitama Prefecture from 19:00 on the 6th (Sun). If you are near, please come. https://t.co/zpWUlsSFH1
0
0
0 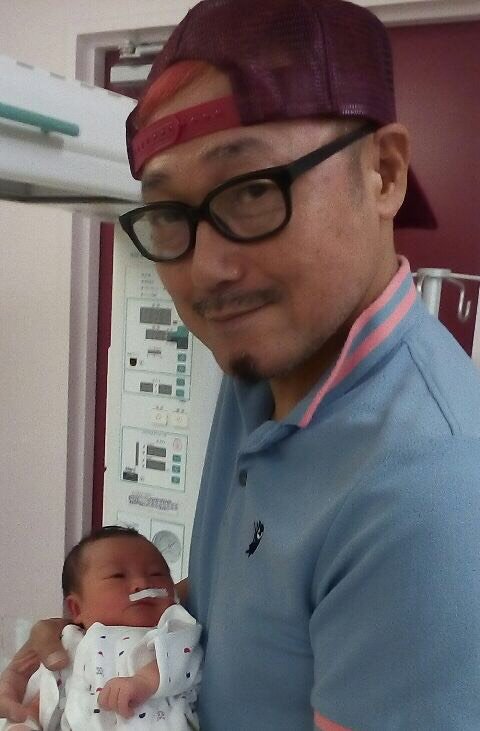 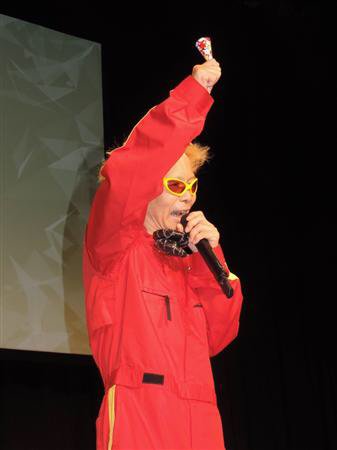 Today's Sankei Sports posted! Torata Nambu of Tokyo Shock Boys, who returned to the stage at last night's event, boiled with the art of ringing the usual crackers in his mouth = Shinkiba, Tokyo Tomorrow will be posted on Sankei Sports, a congratulatory topic for Gyuzo! https://t.co/TQhtHnAjSJ
0
0
0
Torata Nambu resurrection! ️ Scheduled to appear at a corporate event at the studio in Shinkiba on Thursday, July 13th. It is the first revival after discharge after being hospitalized for two and a half months. Will the new electric shock network officially announce the younger brother's electric shock jr members (Genki today, etc.)? On the day of the event, close coverage of the media will be included and will be broadcast at a later date.
0
0
0
Tomorrow, we will broadcast the latest status report of the members on TV! Last week, the broadcast was postponed due to Mako's engagement. It is scheduled to be broadcast on Fuji TV and the morning information program non-stop (due to live broadcasting, there are changes). Please see that the additional interview with Mr. Minami has been completed successfully today.
0
0
0
Saturday version of Fuji TV "Mezamashi TV"! At Mezamashi Doyoubi (6 am-8:30am), member information will be posted on the air on Saturday, 20th tomorrow at around 7:40 ...? (Subject to change in live broadcast)
0
0
0
the report! The news of the Dengeki Network will be published in the Sankei Sports newspaper (entertainment side) on May 17th (Wednesday) tomorrow, and will be broadcast on Fuji TV and the morning information program non-stop (there is a change due to live broadcasting). .. Please take a look.
0
0
0
3.15 Introducing the T-shirts worn by the members at the Hidaka Festival 20 event at Toyosu PIT! We are pleased to announce that it is now on sale at the web shop.・ Dengeki Network COW T-shirt ¥ 3,900 including tax ... https://t.co/z9X8sXlYdR
0
0
0 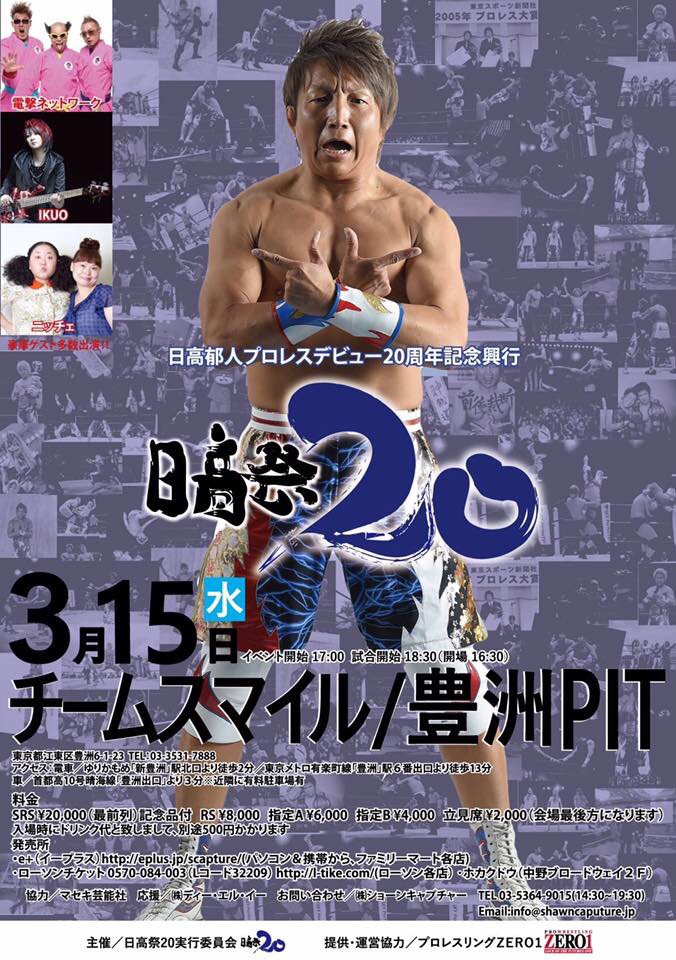 Ikuto Hidaka's 20th anniversary at Toyosu PIT, special commemorative business, Hidaka Festival 20 will appear on the Dengeki Network! Until the performance, there are also secret performers! Various tickets are on sale at E Plus, Lawson Ticket, etc. https://t.co/LIK7Si65ff
0
0
0